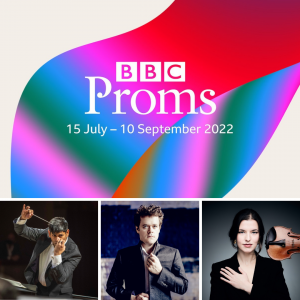 This summer the BBC Proms return to the Royal Albert Hall for another season of exhilarating live performances – with three notable highlights from the JBM family:

Proms-favourite Benjamin Grosvenor returns to make his eleventh appearance since 2011 – this year performing Prokofiev’s Third Piano Concerto with the Vienna Radio Symphony Orchestra under the baton of their Chief Conductor, Marin Alsop. Grosvenor and Alsop collaborated at the Last Night of the Proms back in 2015 – and this Prom will also be televised on BBC 4 on Sunday 21st August.

Violinist Maria Włoszczowska features as soloist in the Royal Northern Sinfonia’s Prom with the London premiere of Kaija Saariaho’s haunting work Vers toi qui es si loin written in 2018 and adapted from the opera L’Amour de loin; she also leads the remainder of the programme, conducted by Dinis Sousa, which includes works by Haydn, Vaughan Williams and Beethoven.