British conductor Alpesh Chauhan is Principal Guest Conductor of the Düsseldorfer Symphoniker, Associate Conductor of the BBC Scottish Symphony Orchestra and Music Director of Birmingham Opera Company. His most recent collaboration with the latter, Wagner’s RhineGold, was received to critical acclaim: “…The City of Birmingham Symphony Orchestra’s sound [was] controlled with an absolutely sure hand by the company’s Music Director Alpesh Chauhan – who was superb throughout.” The Telegraph *****

Following his outstanding debut in 2015, he was appointed Principal Conductor of Filarmonica Arturo Toscanini in Parma and performed and recorded much of the great symphonic repertoire, including a complete cycle of Brahms’ symphonies.  Alongside the recently critically acclaimed RhineGold, other notable opera titles include Shostakovich’s Lady Macbeth of Mtsensk, West Side Story and a production of Turandot in Valencia at the Palau de les Arts Reina Sofía.

A keen advocate of music education for young people, Alpesh is a patron of Awards for Young Musicians, a UK charity supporting talented young people from disadvantaged backgrounds on their musical journeys. He has also worked with ensembles such as the National Youth Orchestra of Scotland and the symphony orchestras of the Royal Conservatoire of Scotland and the Royal Northern College of Music. He was the conductor of the 2015 BBC Ten Pieces film which brought the world of classical music into secondary schools across the UK and received a distinguished BAFTA award.

Born in Birmingham, Alpesh studied ‘cello under Eduardo Vassallo at the Royal Northern College of Music in Manchester before continuing at the RNCM to pursue the prestigious Master’s Conducting Course. Alpesh has studied with Stanislaw Skrowaczewski and was mentored by Andris Nelsons and Edward Gardner in his post as Assistant Conductor of the City of Birmingham Symphony Orchestra from 2014 to 2016.

Birmingham Opera Company’s 2019 production of Shostakovich’s Lady Macbeth of Mtsensk directed by the late Sir Graham Vick was a triumph and led to Chauhan being named ‘Newcomer of the Year’ in the 2021 International Opera Awards. In 2022 he was delighted to receive the Conductor Award from the Italian National Association of Music Critics for ‘Miglior Direttore’ for concerts across Italy in 2021.

Alpesh was honoured to receive an OBE in HRH The Queen’s New Year’s Honours in January 2022 for Services to the Arts. 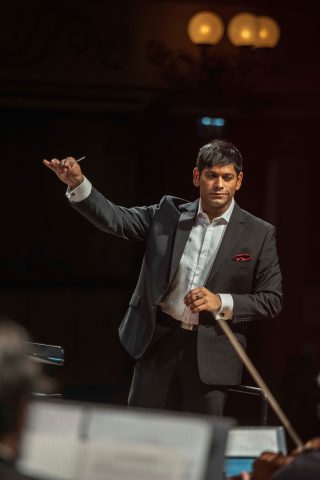 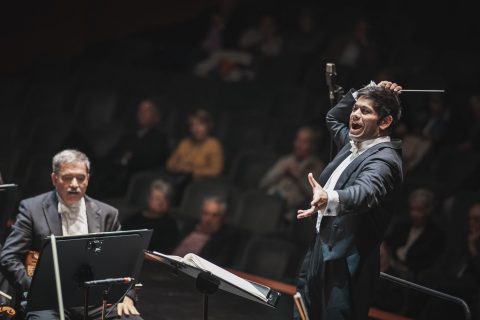 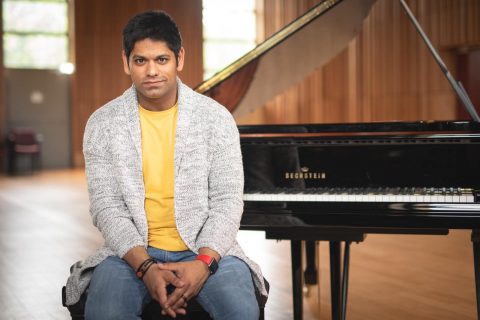 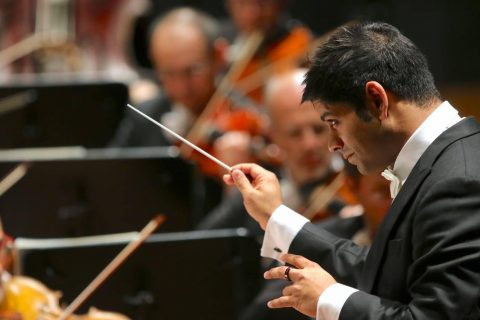 Yesterday at Windsor Castle, conductor Alpesh Chauhan was made an Officer of the Most Excellent Order of the British Empire for Services to the Arts by His Majesty King Charles III. Alpesh was awarded the honour in Her Majesty The Queen’s New Year’s Honours list for 2022 when he commented: ‘It is a very happy…Read more ›

Alpesh Chauhan makes his highly anticipated debut with the Seattle Symphony this week, performing two concerts at Benaroya Hall, the orchestra’s home. The all-Brahms first half of the programme is opened with the composer’s Tragic Overture before celebrated violinist Hilary Hahn takes the stage for his epic Violin Concerto. Witold Lutosławski’s orchestral showpiece, the Concerto…Read more ›

Alpesh Chauhan at the Commonwealth Games and BBC Proms

Congratulations to Alpesh Chauhan who last week conducted both the opening ceremony of the Commonwealth Games with the CBSO and made his BBC Proms main evening debut with the BBC Scottish Symphony on consecutive evenings. Watched by over a billion people worldwide, Birmingham-born Chauhan and the City of Birmingham Symphony Orchestra performed throughout the dramatic…Read more ›

“…The City of Birmingham Symphony Orchestra’s sound [was] controlled with an absolutely sure hand by the company’s music director Alpesh Chauhan (who was superb throughout).”