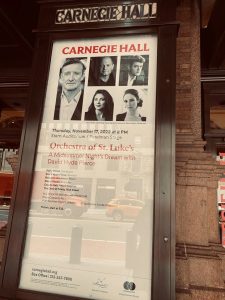 Benjamin Grosvenor returned to Carnegie Hall last week – this time with Orchestra of St Luke’s to kick off their 22/23 season at the prestigious venue. Benjamin performed a dazzling interpretation of Mendelssohn’s Piano Concerto No.1 conducted by Harry Bicket, followed by Liszt’s Gnomenreigen as an encore to a very enthusiastic audience.

Next, Benjamin takes his recital programme including Ravel’s Tombeau de Couperin and La Valse across South America including Montevideo and Sao Paulo before returning to the UK for two performances of Chopin 1 with the Philharmonia Orchestra.

Watch a short video of Benjamin talking and performing excerpts from both Chopin concerti by clicking here.