Andrew Litton jumps in with the Seattle Symphony 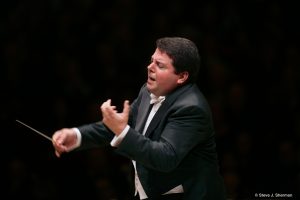 Due to visa-processing issues which made it impossible for Alexander Shelley to appear, Andrew Litton stepped in at short notice this month for three performances with the Seattle Symphony, which as luck would have it, fell in the one available period in his autumn diary.

The programme included the world premiere of  Antiphaser, a concerto for electric violin and orchestra by the Mexican composer Enrico Chapela, performed by Pekka Kuusisto. Not exactly a straightforward jump-in therefore!  The remainder of the programme was made up of music by Debussy and Ravel:  La mer, Prélude à l’après-midi d’un faune and La valse.

Andrew rose to the occasion of course, as always, and the performances were very well received in Benaroya Hall and by the critics:

“Litton provided exciting, sculpted performances of Debussy and Ravel”.  “Litton’s interpretation of La Mer rippled with tension”. “I hope he comes back.” – Seen and Heard International