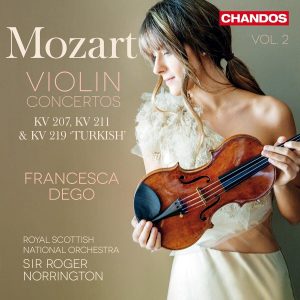 Mozart: Violin Concertos, Vol. 2 is Dego’s fourth release as an exclusive Chandos Records artist, having signed with the label in autumn 2020. This recording follows the stunning success of Vol.1 (CHAN 20234) which was selected as The Sunday Times’ Album of the Week and BBC Music Magazine’s Recording of the Month. In his review, Julian Haylock commented: “… there is a youthful buoyancy and radiant sparkle about these performances that captures the very essence of Mozart’s Salzburg style …”.

Other releases for Chandos include a recording on Paganini’s violin, ‘Il Cannone’, together with Dego’s regular recital partner, Francesca Leonardi (CHAN 20223) “performed with technical finesse and strong musicality” (Gramophone Magazine). Dego and Leonardi also recently released a collection of Mozart Violin Sonatas (CHAN 20232), praised in The Strad as “polished and deeply considered performances of all four sonatas … 70 minutes of unvarnished pleasure.”