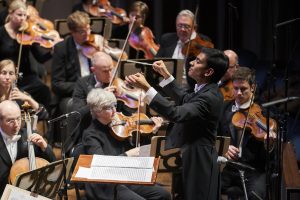 We are delighted to announce that American conductor Vinay Parameswaran has joined the JBM roster.

Parameswaran has just completed five years with The Cleveland Orchestra, first as Assistant Conductor, followed by a promotion to Associate Conductor, benefitting from generous podium time with one of the world’s finest orchestras. Previously he was Associate Conductor with The Nashville Symphony and a Conducting Fellow at the Tanglewood Music Center. He was educated at Brown University and the Curtis Institute of Music.

As a guest conductor he has appeared with the Pittsburgh, Milwaukee, North Carolina, National (DC), and Detroit symphonies amongst others.

“Conducting from memory, Parameswaran led a performance that was remarkable both for its polish and power. There was plenty of nuance in this account, which seemingly probed every emotion — from giddiness and pensiveness to wildness and sarcasm. The performance earned a resounding ovation for the orchestra, and no doubt assured Parameswaran his place on future classical series programs.”