Andrew Litton conducts at BBC Cardiff Singer of the World 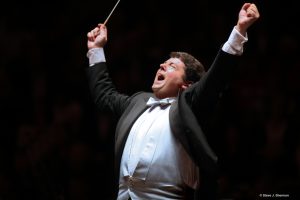 Andrew Litton, Music Director at New York City Ballet and Principal Guest Conductor at the Singapore Symphony Orchestra, is in the UK this month to conduct for the BBC Cardiff Singer of the World competition.

This year, the competition will be staged without an audience, in compliance with the latest government guidelines related to COVID-19, and takes place at St David’s Hall from Saturday 12 to Saturday 19 June.

Now in its 20th edition, the biennial competition has launched the careers of some of the biggest opera stars, such as Dmitri Hvorostovsky, Bryn Terfel, Jamie Barton and 2019 winner baritone Andrei Kymach from Ukraine.

Audiences can follow all the drama of the competition – including all rounds of the main prize, the song prize final and the main prize final on BBC Four television, as well as broadcasts on BBC Two Wales, BBC Radio 3, BBC Radio Wales and BBC Radio Cymru, and every note will be available on BBC iPlayer.