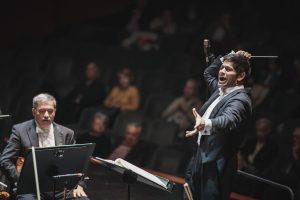 Alpesh Chauhan has been appointed Principal Guest Conductor of the Düsseldorfer Symphoniker at Tonhalle Düsseldorf from the 2021-22 season. Over the course of the coming three years he will lead a number of projects with the musicians, including returns to their main “Sternzeichen” series.

Alpesh comments, “I am delighted to take up this post and that we announce in these strange times, to have a bright future to look forward to, making music together and further enhancing our connection and musical results going forward into the future once we are looking beyond these times of the pandemic.”

He made his debut with the orchestra in 2018 with performances of Bruckner’s Symphony No. 4 “Romantic”, and was praised in Westdeutsche Zeitung: “What Alpesh Chauhan, in his late twenties, unleashed on the podium of the Tonhalle together with the Düsseldorfer Symphoniker, is anything but average. His debut with a German symphony orchestra evoked rapturous enthusiasm.”