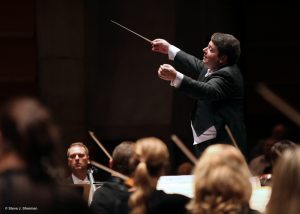 JBM is delighted to welcome Andrew Litton to the roster.

Music Director of New York City Ballet Orchestra, Andrew Litton holds positions across the world including the title of Principal Guest Conductor of the Singapore Symphony Orchestra, Music Director Laureate at the Bergen Philharmonic and Conductor Laureate at the Bournemouth Symphony. He guest conducts some of the world’s leading orchestras and opera companies and has a discography of over 130 recordings, with awards including America’s Grammy and France’s Diapason d’Or. Also an accomplished pianist, Litton often conducts from the keyboard and is recognized as an authority on Gershwin, having extensively recorded and performed his works as pianist and conductor including the Covent Garden premiere of Porgy and Bess.

James Brown comments “I have had the pleasure of playing for Andrew in concerts and on recordings with the London Philharmonic, when we were both in our twenties, and then representing him in Europe more recently at Hazard Chase. I am delighted that he has put his faith in JBM and that we now have the honour of his worldwide management. He is a musician of formidable talents and great charisma, equally at home in a wide variety of repertoire, as evidenced by his extraordinary discography”.