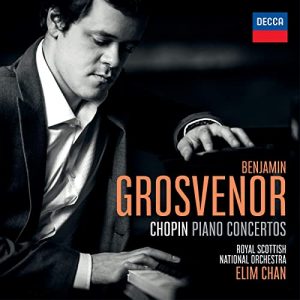 Benjamin Grosvenor’s most recent recording on Decca Classics has been announced as winner of the Concerto category at the 2020 Gramophone Awards. The disc, which was released in February, features Frédéric Chopin’s two piano concertos, and was recorded with the Royal Scottish National Orchestra under the baton of Elim Chan. Named Gramophone’s Recording of the Month in the magazine’s March issue, reviewer Harriet Smith declared that it was “the kind of disc that makes you rethink these works and appreciate them all over again”. The recording was also awarded a Diapason d’Or, and featured as Album of the Week on Classic FM and in the Sunday Times.

Having signed to Decca in 2011, becoming the youngest British musician ever, and the first British pianist in almost 60 years to do so, Benjamin has released four other acclaimed albums on the label so far – Homages (2016), Dances (2014), Rhapsody in Blue (2012) and Chopin, Liszt and Ravel (2011).

For further details about the recording please click HERE.