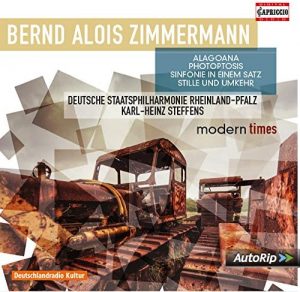 Recorded during Steffens’ time as Music Director of the Deutsche Staatsphilharmonie Rheinland-Pfalz, the series of 20th Century works was released to critical acclaim. Rob Cowan, for Gramophone Magazine, says ‘…Rarely have I enjoyed a creative compilation as much as I’ve relished Capriccio’s enterprising l0-disc Modern Times Edition, where the conductor Karl-Heinz Steffens inspires the Deutsche Staatsphilharmonie Rheinland-Pfalz to give their all… I can’t recommend it enough…’

The 10 disc box set was released in February on the Capriccio label.