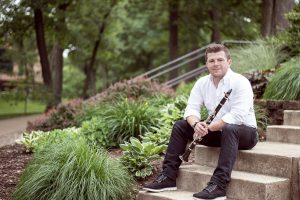 On Tuesday 18 October with the Dallas Winds and conductor Jerry Junkin, Julian Bliss gives the world premiere of Divine Mischief, a new Concerto for Clarinet and Wind Ensemble written for him by the eminent composer John Mackey. Following the premiere and a further performance with Baylor University’s Wind Ensemble and their Director of Bands, Dr. Eric Wilson, Bliss takes Mackey’s concerto across the United States this season.

Get your tickets to the live stream of the Dallas Winds premiere here.