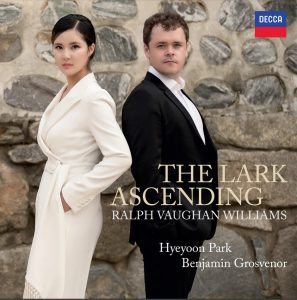 Hyeyoon Park and Benjamin Grosvenor have released a new recording of The Lark Ascending in its original version for violin and piano to celebrate the anniversary of Ralph Vaughan Williams’ birthday on Decca Classics.

You can listen to the recording here which is currently No. 1 on Spotify’s Classical New Releases.

Whilst preparing to record The Lark Ascending, Hyeyoon was eager to witness the natural phenomenon that inspired the work. She says,

“I had hoped to witness the majestic spectacle that inspired it, and had the happy fortune to do so on a long Kentish walk in June over the Jubilee weekend. When I was starting to get tired after having walked for about three hours, I took a rest in a vast field. There was a trill-like, piercing song and as I looked up, a small bird was ascending level by level while maintaining an elaborate cry. When it reached a great height – remarkable for such a small bird – it hovered freely, as if finally unfettered after the arduous climb and fond of the view of its little kingdom. This sequence of images has been imprinted on my mind and definitely inspired my interpretation of this piece. I hope you can also visualise my experience when you hear this recording!”