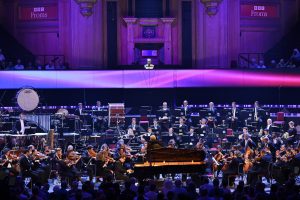 Benjamin returned to the BBC Proms at the Royal Albert Hall on 13 August for Prokofiev’s virtuosic Third Piano Concerto with the Vienna Radio Symphony conducted by their Chief Conductor Marin Alsop.

He treated the audience to a stunning encore of Ravel’s Jeux d’eau – rather welcome on such a hot day in London!

You can watch his full performance live here (from  34:30)

Next up, Benjamin performs Chopin’s Piano Concerto No.1 to a sold out Seoul Arts Centre conducted by Mo. Chung with the KBS Symphony Orchestra, with the programme repeated the following day in Yeosu. He then heads to Auckland Philharmonia (Grieg) and Symphony Orchestra of India (Mendelssohn 1 and recital) before performing a duo recital with Hyeyoon Park (25 September) and solo recital (27 September) in Victoria Hall, Singapore.