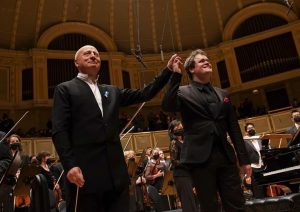 Benjamin Grosvenor has performed Chopin’s Piano Concerto no. 2 no fewer than four times over the past week with Mo. Paavo Järvi and the Chicago Symphony Orchestra to make his triumphant debut with the orchestra:

“[In Chopin’s Piano Concerto No. 2, Grosvenor] captured the brooding agitation of the opening Maestoso, where he was in sync with the rhapsodically shifting moods of Chopin’s writing. The exquisite central Larghetto had the intimate feel of one of the composer’s Nocturnes, Grosvenor sustaining its limpid melodies to great effect … audiences can look forward to future outings from the young British star.” – Chicago Classical Review, March 2022, Tim Sawyier

Next stop for Benjamin is the Baltimore Symphony Orchestra where he performs Beethoven’s Piano Concerto no. 3 conducted by Jonathon Heyward, which will be livestreamed this Friday, 11 March.

Following these three performances, Benjamin embarks upon an eleven date tour of North America and Canada, with his first recital in Denver also livestreamed on Wednesday 16 March, culminating in performances in New York and Philadelphia on 2 and 5 April 2022 respectively.