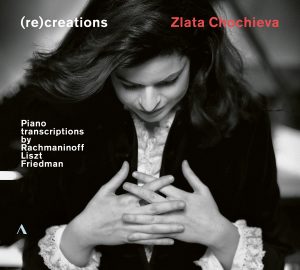 We are very pleased to announce that Zlata Chochieva’s new disc ‘(re)creations’ will be released worldwide on 12 February 2021 by Accentus. She presents piano transcriptions by three great pianists and composers, Rachmaninoff, Liszt, and Friedman, that lend new life to works by J. S. Bach, Mendelssohn, Schubert, Mahler and many more. Here is a look behind the scenes that gives a glimpse into this exceptional new release!

Zlata says: “I’m really looking forward to being able to share my new CD which I was lucky enough to be able to record during 2020, the year when life for us musicians felt so uncertain, lonely, silent… and we became even more nostalgic, fragile and sensitive than we ever were before. This all made me want to share my inner voice through the program which became very personal to me. There is a form which builds a bridge between two composers, between two different musical worlds and epochs, making it sound as a unity which doesn’t destroy but brings together – this form is a “transcription”.

If you want to be one of the first to listen, it’s available for pre-order on Amazon, iTunes and others: lnk.to/ACC30531